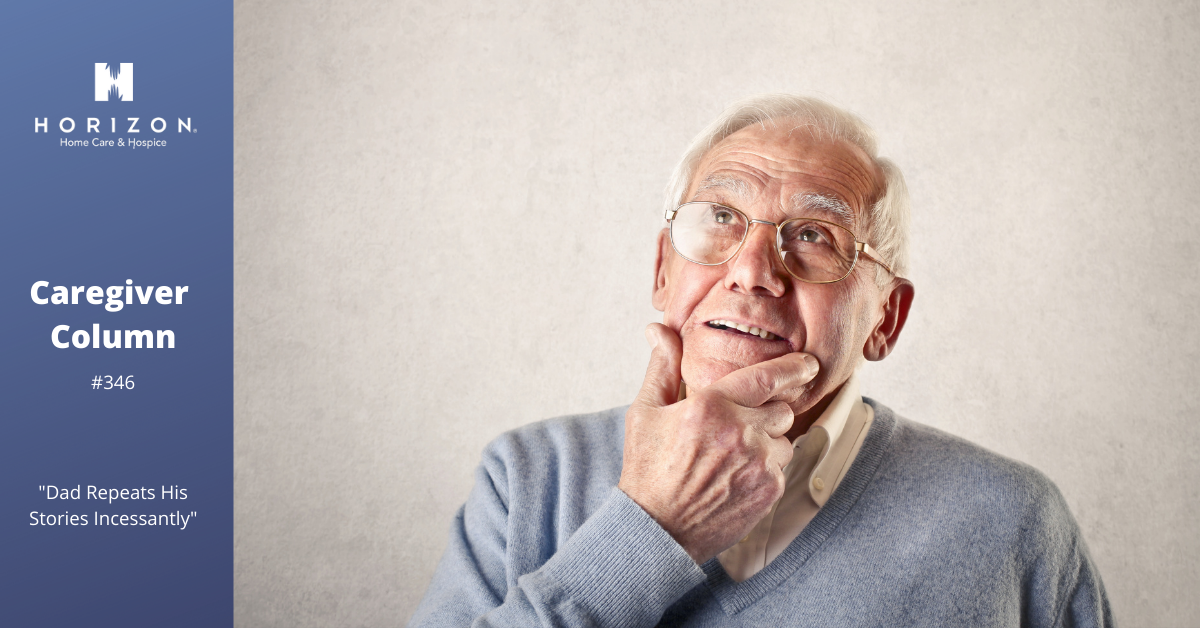 "My father repeats the same stories over and over. It really tires his caregivers and children to listen to the same thing repeatedly. If you mention to Dad that you heard that story before, he stops but will bring up the same story the next time you see him.

What we children are all wondering is what to do when this happens. It honestly makes visiting with him very frustrating, and it has gotten to the point that we would rather not visit at all.

We do realize that this is what older people do for some reason. We just wonder how to get it to stop. We also worry that no one will want to be around him with this same conversation all the time. By the way, my father does not have dementia. His memory is sharp and he manages his own affairs quite effectively."

I believe that we have all had the experience you describe with an elderly relative or parent, because it is a very common thing to hear the same story over and over. Actually, we at all ages tell the same stories at times, just less frequently than the elderly.

You are not going to change how your dad behaves or his need to tell the same stories. I recommend that rather than be annoyed by the same story, you approach things a bit differently.

Since your father doesn’t have dementia, he tells the same stories likely for other reasons. They may have gotten a good laugh in the past, and he wants to elicit that reaction again. He may repeat a story if he has nothing to add to a conversation, and he needs something to say. Another reason could be that there is something about the past in his story that he desires to make peace with and understand. It’s also likely that his memory about who he told what story to is not as good as it once was. Just think how often you stop yourself and say, “Stop me if I told you this before” It happens to all of us.

I suggest that to make your visits more enjoyable, you come to the visits with things to talk about. Filling the void is what some extroverts do. Your father may be filling that void because it needs filling. So, on the way to your dad’s house, come up with topics from the past that you would like more information on. My suggestions are:

You can see where I’m headed here. Be the good conversationalist you want him to be. It does take a little bit of effort, though the reward can be significant. Often times, we are so very busy and wrapped up in our own lives that we don’t take the time to really listen to others. After they’re gone is too late. So frequently, I have additional questions about those that have passed. Taking the time now to dialogue will make your life richer.