Dad Just Sits In the Dark 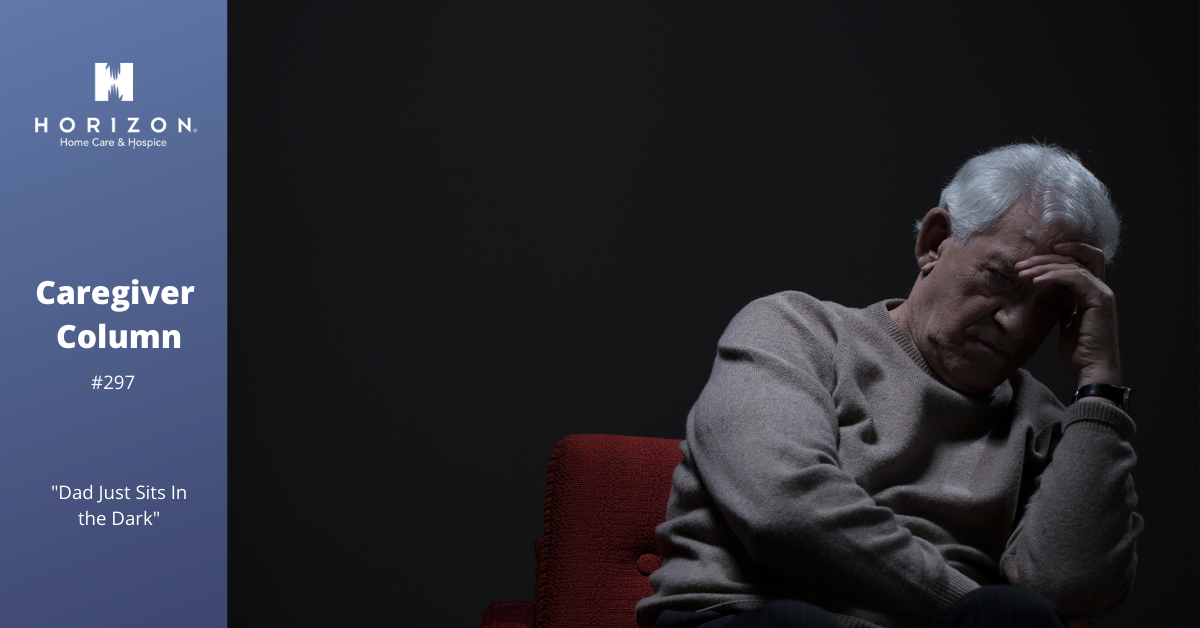 "We’ve noticed that Dad doesn’t turn his lights on in the evening. It’s a little bit like entering a cave when you arrive at his house. Frankly, it’s a little bit creepy.

Dad does tend to be frugal about things. He was always yelling at us as children to close doors and turn off lights. We are not “heating the outside,” as we heard many times.  Or, “I don’t work for the electric company” was another of his favorites.

I don’t believe that Dad has financial issues. A few lights on at night will not break his budget. There are usually no lights on in the room where he’s watching television ,and there may not be any other lights on in his home. He doesn’t seem to mind if we’re all sitting there in the dark.

He doesn’t sit in the dark during the day. The drapes are always open and there’s plenty of sunlight in his home. Do I say anything?"

If your father has no need for lights on at night, it’s not a significant issue. You haven’t described someone who’s shut in, sitting in the dark all day long. The fact that he allows sunlight to stream in during the day suggests that he is embracing daylight during the day and darkness at night. It’s likely how humans were meant to live, and did before we had artificial light.

I do agree that most people have at least one light on in the room they are sitting in, if not another room or two. Dad clearly feels that that is unnecessary and wasteful.

The question is whether or not it matters. There are only two reasons that would concern me—are safety and mental health.

Let’s tackle safety first. Let’s assume he has lived at his residence for some time. If that is true, then getting around even in the dark may not be difficult for him. If he’s able bodied, and furniture or obstacles are not being placed in his path, the risk is not too great.

One thing you might want to mention is that while he does not want to use excessive lighting, safety lights or nightlights near the floor may be a good idea. Fractured hips are most common in the elderly and a fall can mean the loss of independence. It is so very easy to trip over something in the dark that someone left in an unusual spot. It could even be him that forgets and leaves something lying on the floor that is now a hazard. Motion sensing lights would only go on when he enters the room, so energy conservation can be managed if that is his primary concern.

The second thing to have concern about is your father’s mental health, although if he is opening all the drapes during the day, he’s not sitting in the dark most of the time. The greater concern would be darkness all of the time, not just in the evening. Depression is something to watch for, but not of concern if this is a lifelong pattern and only in the evening.

We all do have our own lifestyle and areas of concern. Energy conservation seems very important to your father and one has to respect his views while working to keep him safe in his home.

May you successfully navigate the lighting issue together and come to a reasonable solution.