Why Is Dad Grumpy In Retirement? 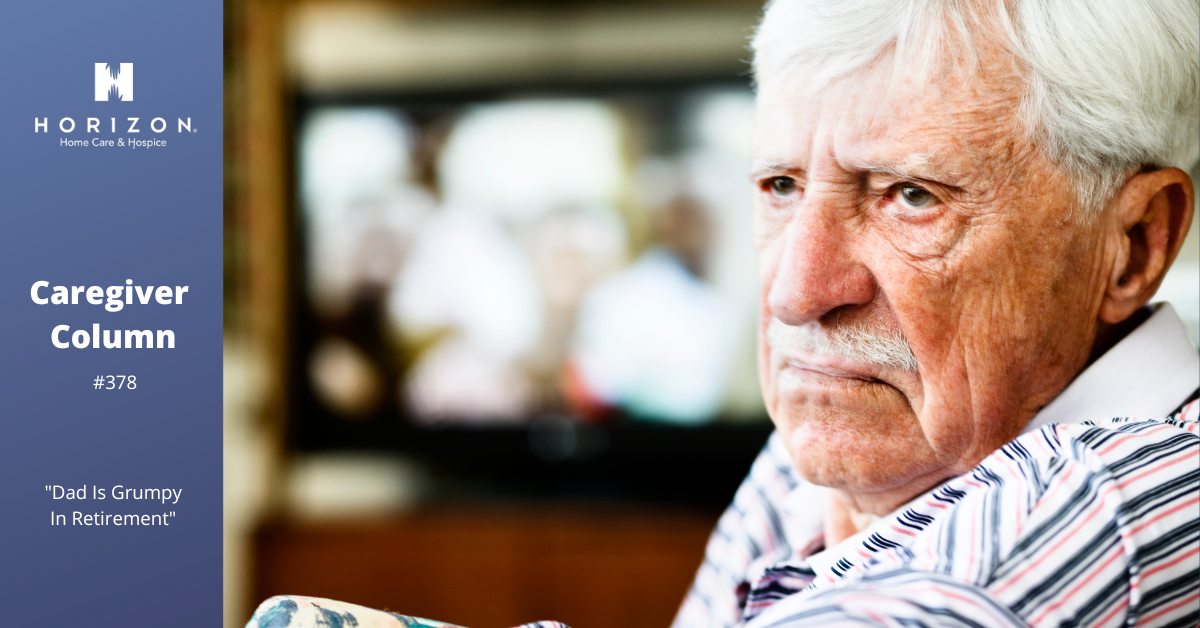 "My father retired a couple of years ago at age 70 and I don’t think he’s happy. He was always such a busy, engaged, active guy. Now he sits around and complains most of the time. He isn’t acting like himself at all.

My mother is quite frustrated with him, but also unwilling to say a word to him about it (not that I blame her).

He did have a very nice job that he seemed happy doing. I wonder if he should go back to work. That may not be possible, but we just want back the old Dad!"

You have described one unhappy man who’s not having a good retirement so far. I understand your frustration and that of your mother’s.

He’s troubled, and it’s important to get to the bottom of why. Someone that unhappy has something going on beneath the surface.

The first thing I would explore is a health issue. You have described a fairly significant and uncharacteristic personality change. While retirement can upend your usual routine, it rarely changes a personality to this extent.

Whoever is closest to your father needs to find a quiet time to talk to him about how he’s feeling, physically and emotionally. Your mother lives with him and should pay attention to how he eats, sleeps, drinks, eliminates, and exercises. Ask your mother to pay attention to the details for a few days. Yes, it is possible to live with someone and even sleep in the same bed without being tuned into the specifics.

Another thing to pay attention to is short-term memory. Memories of the past, even back to childhood, are retained in most individuals with early dementia. Sometimes, family can think a person is mentally strong because of their good long-term memory. Is your father forgetting things, such as what you told him an hour ago? Where he parked the car? Names of family members?

A very real possibility is that your father is not feeling physically well and isn’t telling anyone or seeing a doctor. Worry and discomfort may be making him very unhappy. If he isn’t someone who saw his doctor with some regularity in the past, he may be reluctant to enter the healthcare world. It can indeed be a frightening thing to consider.

It’s also possible that your father’s unhappiness is caused by the loss of employment through his retirement. Not everyone is cut out for a nonproductive lifestyle. When you’re in the work grind, retirement sounds wonderful, and for many, it is. But your dad may miss the way he felt he was contributing. He may also be grieving the loss of status or position. When you’re no longer defined by your job, society can disregard you, and consider you irrelevant. It can be difficult to come to terms with.

Many also lose contact with work associates who they assumed were friends beyond the confines of the office. That work network is often your social life, too. That can rapidly fade away when you stop working, and not everyone is prepared for that. He may not have a backup for the void that loss creates.

If your father’s health is determined to be fine, he may want to consider part-time work, as you did not mention any hobbies of his. We all need meaningful things to do. To just rest and exist may not bring him satisfaction. Note that I didn’t mention money or type of work. That’s because those things don’t matter. Any work can get him out of the house and around other people.

Consult with professionals about these possibilities. If you’re unable to find resolution easily, start with his primary medical provider. Your father’s behavior is abnormal, and needs intervention.

I wish you well on this journey, and the best possible outcome.