Should Dad Work After Retirement? 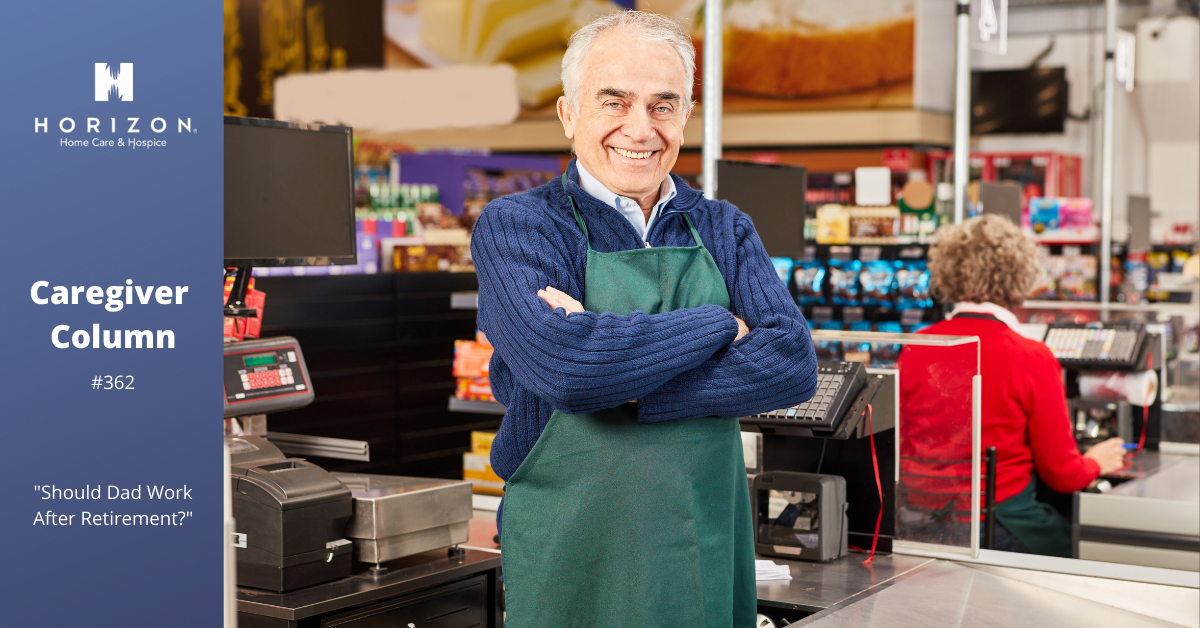 "I am so worried about my 70-year-old dad who retired early and is living on social security. With inflation as it is right now, I can’t see how he’s going to make it. He can barely pay his bills now, and has me driving him all over town to get the best grocery deals.

By the way, my father is able to drive, and quite capable. He simply doesn’t want to use the gas. That’s how tight things are for him.

Truly, I think Dad should get a job and work while he still can. I was wondering what your thoughts are on the situation."

Without any health restrictions holding your father back, a job is a marvelous idea. If he is sound both physically and mentally, there’s no reason not to pick up at least a part-time job. This would provide him some grocery relief, and help him put away a bit for the future when he can no longer work.

It's unfortunate your father didn't plan for retirement by investing so he wouldn’t be entirely dependent on Social Security. The Social Security system advises anyone who will listen to contribute to an IRA or retirement plan. It wasn't intended to be an individual’s only source of income in retirement. Yes, you can survive on it, but it will be a very rough option. Right now, with inflation coming back reminiscent of the ‘70s, no one wants to be dependent on fixed income like your dad is.

Right now, many businesses are in need of employees, so it’s a wonderful time for him to secure at least a part-time job. Because of his age, it won't affect his Social Security checks in any way. He can collect a paycheck and Social Security both. In fact, I’d encourage him to get a job now before any form of recession takes hold, and the job market tightens up. There may even be some form of work-from-home job he could secure.

Let your father know that plenty of retirees work part time, and quite a few are returning to the work force. It’s a win-win situation for everyone. He does need to get out there now, though, to beat the rush.

If and when your dad goes back into the work force, strongly encourage him to save half of what he brings in. If he’s truly living only on Social Security, he needs some savings for the future, and there is no time like the present. He should have been doing that all along, but there’s nothing you can do about the past.

If he has trouble saving, tell him to have his employer automatically send one half of his first and each subsequent paycheck to a savings account so that it doesn’t become disposable income. Good savers use little tricks like that to save more than they otherwise might. If he approaches saving like this from the first check forward, he won’t miss that money he saves, as he doesn’t have it now.

It’s a bit of a paradigm shift to think of retirees working again, and it will be an adjustment for your father. I believe that if he’s healthy and in need of money, he should go out and earn it, even at his age. There are plenty of 70 year olds who work, and the number increases every day. I personally believe that semi-retirement is the optimal way to live.

Now, if he can secure work he really enjoys doing, there is an extra bonus. More than a paycheck, he will meet new people, get exercise, and learn new things. It sounds wonderful to me.

Now is the time for a talk, followed by action. Share my thoughts with your father and help him secure employment if he’s interested.