Should Dad Be Voting Anymore? 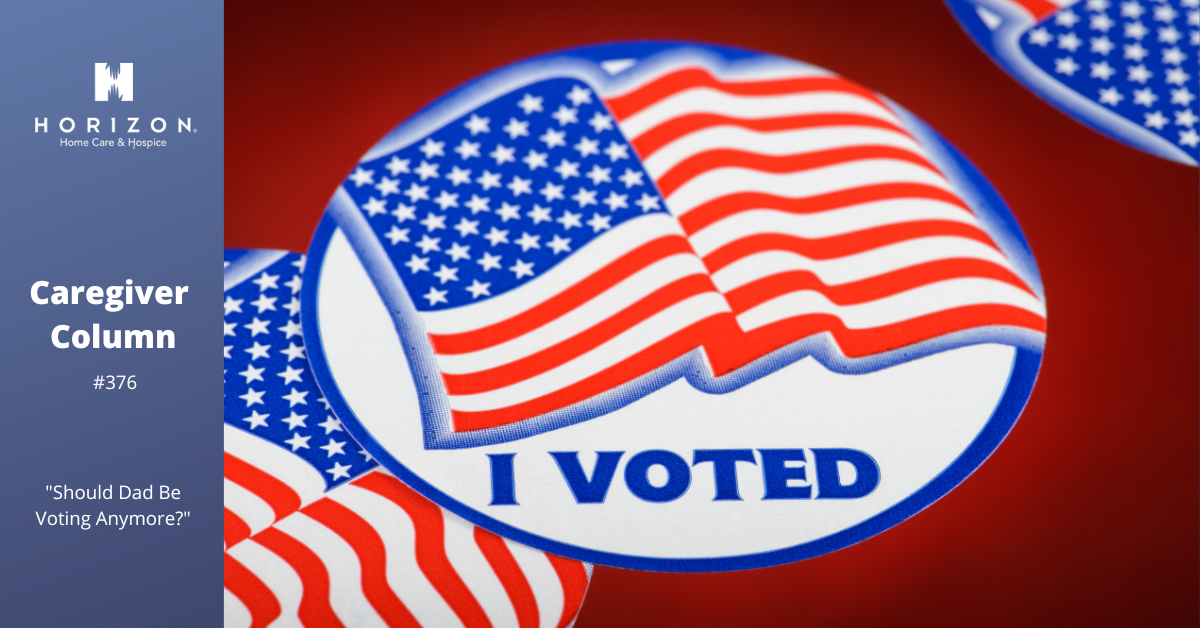 "My father lives alone, but with a lot of help from his children. Lately, he’s not always clear on what day it is or who certain people are, which is causing us some concern.

We do have a plan for his future living arrangement and are working quickly to make that plan happen. We realize that he should no longer live by himself without supervision. It’s just not safe any longer.

My question today is about voting. Someone came to the door and offered to take my dad to vote just this past election. Of course, Dad had no idea who that person was or why they came to his house. I happened to be there at the time, and I stepped in. I told the person that if Dad wanted to vote, then I would take him, or help him get an absentee ballot.

I’m now wondering about the whole process of elderly voting and whether or not Dad should vote. He no longer reads the paper and has no idea who is running. Sometimes, he talks about Kennedy and Nixon, if that gives you an idea of where he’s at. I’m not even sure I should bring it up come next Election Day. What are your thoughts?"

What a timely question. Yes, it’s soon to be midterm elections with big national, regional and local consequences. We will all be acutely aware of who’s running and what their ads tell us.

I hope that everyone listens closely and attempts to understand the candidates’ positions on key issues. It’s our obligation to be somewhat informed before Election Day, though we are all given the right to vote at age 18, regardless of our knowledge. There are restrictions for felons, and those a court has deemed incompetent to vote. I would check your state’s specifics on incompetence. Here is one source: http://www.bazelon.org/wp-content/uploads/2017/11/2016_State-Laws-Affecting-Voting-Rights-of-PWD.pdf

Now, on to your father’s specific situation. His ability to manage his day to day is starting to fail. It’s unlikely that you’ve taken any action at this time to have him declared incompetent, but it seems you’re headed in that direction as his condition worsens. You know your father best because you see him frequently, if not daily.

There are indeed people out there who take advantage of the elderly to pursue their own agenda. Be it elections or assets, there are those who will attempt to secure what they want from one of our most vulnerable populations. It’s your job now to protect him as he once protected you. Now is a good time to reiterate certain safety tips with your dad. Perhaps he should not open the door/answer the phone for anyone he does not recognize, and he should certainly never go anywhere with them or share sensitive info. Caller ID, video doorbells and “No Solicitation” signs may offer you peace of mind until you can get him in his new living arrangement.

If your father is unaware of coming elections and has no idea who is running, should he vote? That’s a very good question. I ask of you, would you let him drive if he has no idea how to navigate the road and can no longer get home safely? I strongly doubt it. It doesn’t take the Department of Motor Vehicles to take his keys away (for most families). Voting is a parallel situation. Why go there if your father has no idea what’s going on? Don’t bring up voting and elections to your father. If it is very important to him to vote, let him broach the subject with you, first. Maybe he won’t bring it up at all, which releases you from this conundrum.

This is a timely topic and one that many of us with elderly parents are pondering. It sounds like you are a thoughtful person. Continue to protect your father as you navigate your journey together.