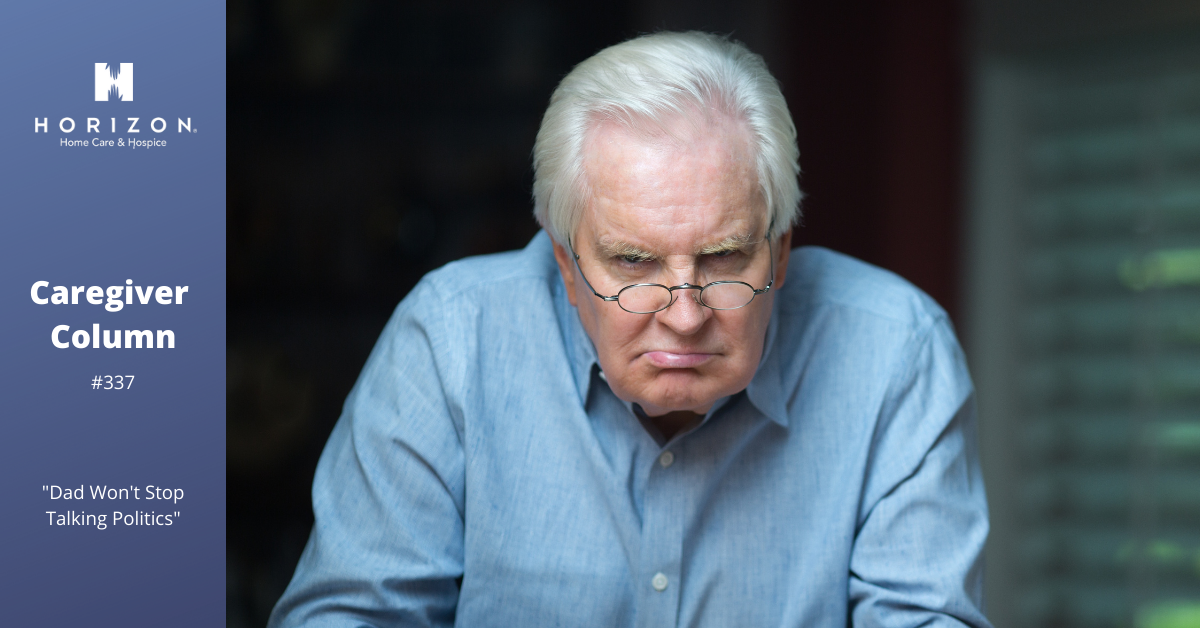 "My father of 85 years is a big talker, and he loves to talk politics. Unfortunately, it’s escalated in the last two years. Dad now turns every conversation into a political debate!

As you would suspect, not everyone agrees with his agenda. I can see that he’s off-putting to almost everyone he comes in contact with. How can I help him tone it down a tad? I’m afraid he will lose all his friends."

"This last presidential election brought political conversations out in public seemingly more than in prior years. It feels as though our last election was also more contentious than any I remember in my lifetime. The debates were a prime example of that--the hostility was very high, and constant. That your father is reacting to and talking about current events is not completely unusual, as many others are as well. With that said, it sounds like he’s going beyond what others are comfortable with, even in these times.

There are ways to read the room and save friendships, though, and maybe he can moderate his enthusiasm for politics. Whether he can, or wants to pick up on subtle queues, is debatable. But let’s assume he’s not so wound up in his own head that he isn’t aware of what’s happening around him.

When he does this around you, change the subject and do it repeatedly if you must. If he asks why you’re doing that, tell him you are not interested in discussing politics. Don’t let him belittle you for not engaging. You have the power to walk away.

His longtime friends are used to him, and may be tolerant for a while, but not forever. If they don’t mind, let it ride. But if he has indeed escalated to a considerably annoying level, it’s time for a conversation. I wouldn’t recommend an intervention or a heavy-handed approach.

If you think there’s a chance your father might be receptive to some input, mention that you’ve noticed people shying away from conversation with him when he starts with his political talk. Expect some blow back from him, and prepare for it. When he settles, let him know that you love him and don’t want to see him isolated because he’s scaring people off. With that said, the only person that can change behavior is oneself.  Dad spouting his opinions is quite likely a lifelong behavior. What you can do is modify your response to it and support him if he desires to change. Don’t be surprised if he has no interest in moderation at this point.

I can see that this has already been an uncomfortable journey. I wish you well as you navigate this course with your father. It’s not an easy one to change. The best outcome may be that you remain an open, objective thinker for the next generation, and avoid repeating his behavior.