Dad Takes Too Many Risks 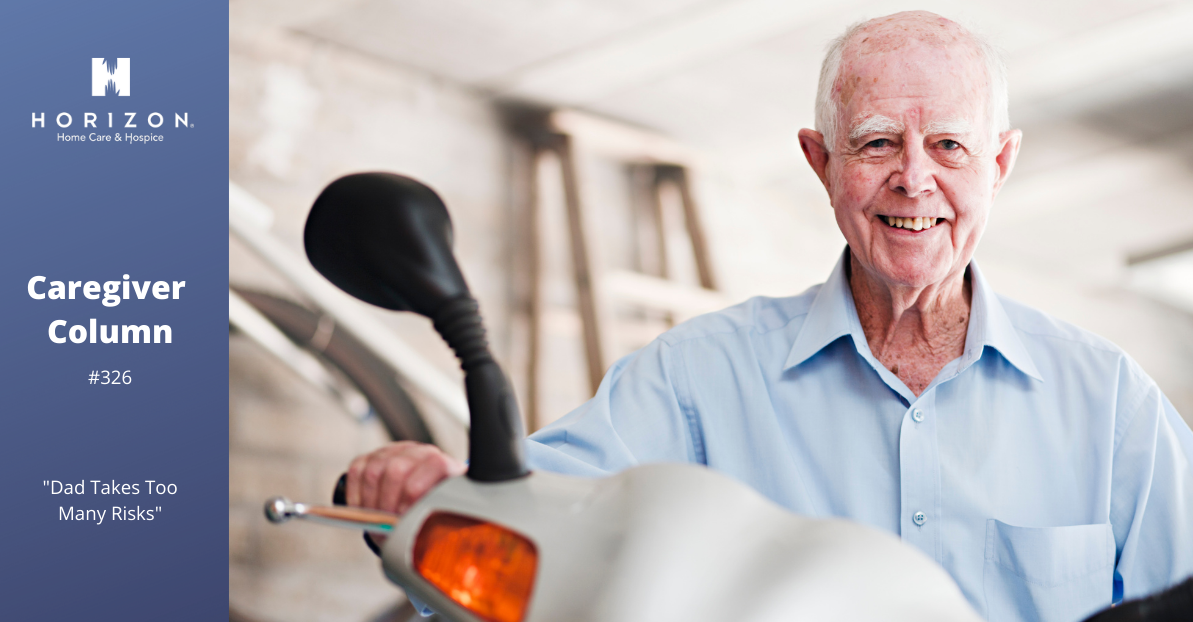 "My father does not act his age and frankly, it’s getting scary. I suspect you think I’m overreacting, so I’ll do my best to describe some of the things he does that are just too risky.

Dad thinks it’s okay to climb ladders to his roof! He just seems to go up there to check his gutters, and goodness knows what else. He also drives long distances alone. We think he should drive with a companion. He’ll drive from the midwest to Florida alone. Another thing he does is take his boat out on the lake alone. He loves fishing, so he just launches his boat and goes. In his defense, he’s been doing these things all his life, but we wonder how safe it is at his age.

Did I mention Dad is 88 years old? This guy shows no sign of slowing down, and we worry we’ll find him dead in his car or boat someday; that is, if he doesn’t fall off his roof into the bushes first.

How do we talk sense into him?"

Oh my, your father is an adventurer! He's living his life to the fullest and I'm a very strong advocate for him doing that. Honestly, I think there are others who could benefit from his can-do attitude. Being the child of a parent like him is another matter. You see what can happen. Maybe you even have your own kids right now and worry about their risk-taking, too. It's possible that currently, your worrying is overwhelming and you just need dad to act his age.

Let’s tackle the activities you mentioned. Some are concerning, while others, not so much.

First--the ladder climbing situation. It's a rare individual at 88 years of age who has the necessary balance to climb ladders, and walk around on uneven roofs. Since most homes have slanted roofs, and getting on and off a ladder requires many steps without railings, it's time to outsource all roof jobs. The ladder is not as concerning as the steps, and the transfers from one surface to another.

Driving for the elderly can be a challenge, though not for everyone. If your father’s vision, hearing, cognitive abilities, and reaction times are good, he may be a safe driver. Armed with a working cell phone with bluetooth capabilities, he can travel about as safely as other adults. A car that has crash avoidance, lane correction, and other wonderful safety features can make driving even safer.

Boating is the least worrisome of the activities you mentioned. While it does take effort to launch a boat, fish, and re-trailer the boat at the end of the day, it sounds like he has been doing that for a very long time. He likely does it far better than many younger adults who are newer to boating. I say that you do not even try to intervene on the boating front. Pastimes are important, and this one is low-impact and fairly safe.

In summary, you have a father who is not ready to sit in a rocker and watch pedestrians walk by his house for entertainment. He actively lives every day of his life, doing what he wants. He isn't slowing down. It's wonderful that his health is good enough to allow him to live on his terms.

I suspect that you have already voiced surprise about at least some of his activities. Now it's time for a more serious conversation. Start with the one thing that worries you the most. I do not recommend that you throw in everything that is on your mind. Just tackle the most concerning thing first. The roof-walking would be high on my list. When you talk to your father, be calm and thoughtful. Listen to his thoughts on the subject. You may not prevail in the first conversation, though you will most certainly instill a bit of doubt in his mind. Letting go of some activities is difficult as we age, and most of us need to think about it for a while before we make a change. Sometimes it comes after a near miss. You may need to reach a compromise of some sort. If your relationship is strong, you will be able to have a reasonable dialogue.

Wait some time before mentioning other activities--months at least. Becoming too intrusive may damage your relationship. Pick the best time mention a concern, like when things are calm and an opportunity presents. Remember to seek his advice about choices you make. A reciprocal relationship between father and child is one based on trust and respect. You are far more likely to be successful with safety suggestions if you also accept his suggestions and acknowledge their successful implementation in your life.

I believe that you are blessed with a father who is living his life to the fullest. He will present continued challenge and joy for the two of you to share. Hopefully he stays safe on your shared journey.