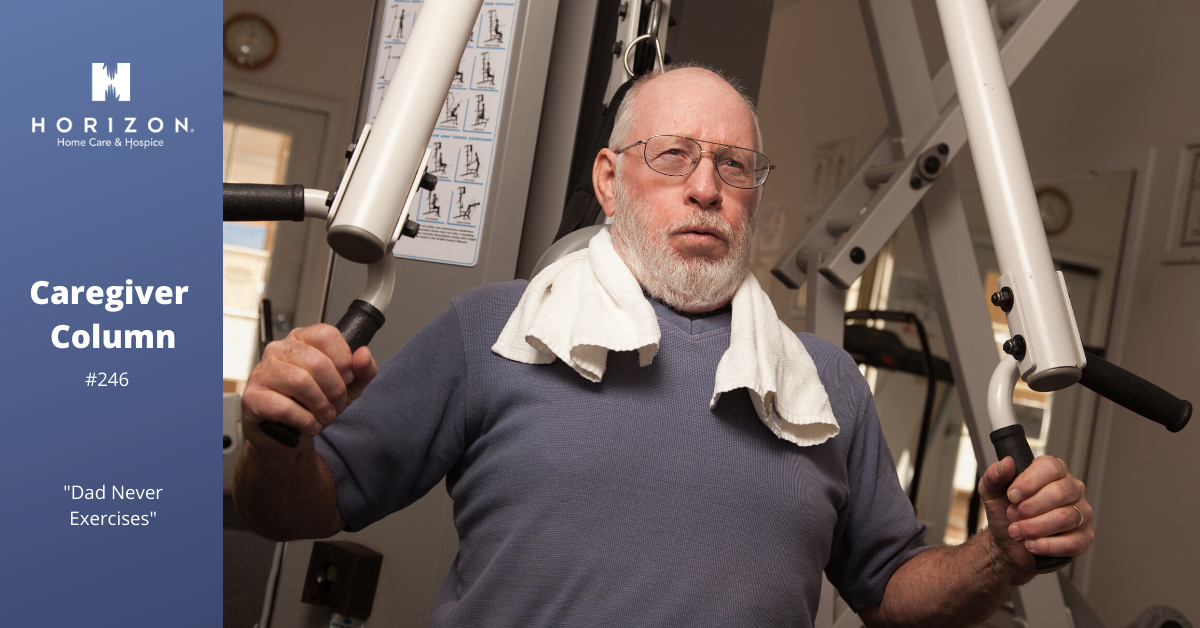 "I need some advice about exercise. I’m an avid runner, and I run about 3K each day. My father, though, has never exercised a day in his life. He’s 85 now, and feels exercise is a silly notion of my generation. In his day, “work was exercise.” The problem is that he no longer works. In fact, he sits all day reading, eating and watching television. Nothing he does would be considered physical work. Is there any way to convince him that he’s on a slippery slope?" - READER

Your father has a few things right here—the running, biking and overall exercise revolution is somewhat generational, and is likely a foreign concept to him. The work his generation did was often manual labor and quite physical. At the end of the work day, they were physically tired and needed rest, and had no reason to need to go to the gym. The women of that time were also hanging clothing, tending gardens, cooking and doing other kinds of physical work. The thought of going for a run never even crossed their minds, probably.

Fast forward to 2020. Your dad is older, has never exercised, and likely has some aches and pains because exercise is not a part of his routine. But it doesn’t matter that it’s your passion—you have to understand that he’s from another time.

With that said, movement is very important. The less he moves, the less responsive his muscles are to actions like getting out of chairs, rolling over in bed, balancing to prevent a fall and more. He needs to keep moving in order to protect his lifestyle and maintain his independence.

You may think that providing books or articles on diet and exercise is a good idea to get him to see the light. I would avoid that because the information is readily available, and he’s not interested. If he were, he’d seek it out himself. Most need to find their “aha” moment on their own, no matter how well-meaning a family member is.

I’m guessing he values work. Of course he may feel that he has earned retirement and rest, but most people also want to be of value in their lives, even in retirement. I recommend that you ask him to assist you or a sibling with something that requires movement. It could be painting a room, preparing a dish, building a deck, watching a child or helping with another kind of project. Being involved and useful matters, so just keep the projects coming. He may complain a tad, though I suspect he will feel proud to be of use to you.

Remember that exercise is a habit. You’ve made it a healthy habit in your life. For him, it was a habit tied into work, and when that stopped, so did his exercise. If possible, it’s a good idea to bring back enough work to also bring back exercise, even if in small doses.

Some people can be influenced by their physician, so that’s another avenue to explore. If you thoughtfully approach a solution without wrapping it up in your own perception of how Dad should live, you may have some success in getting him to remain active. I wish you success on this journey.