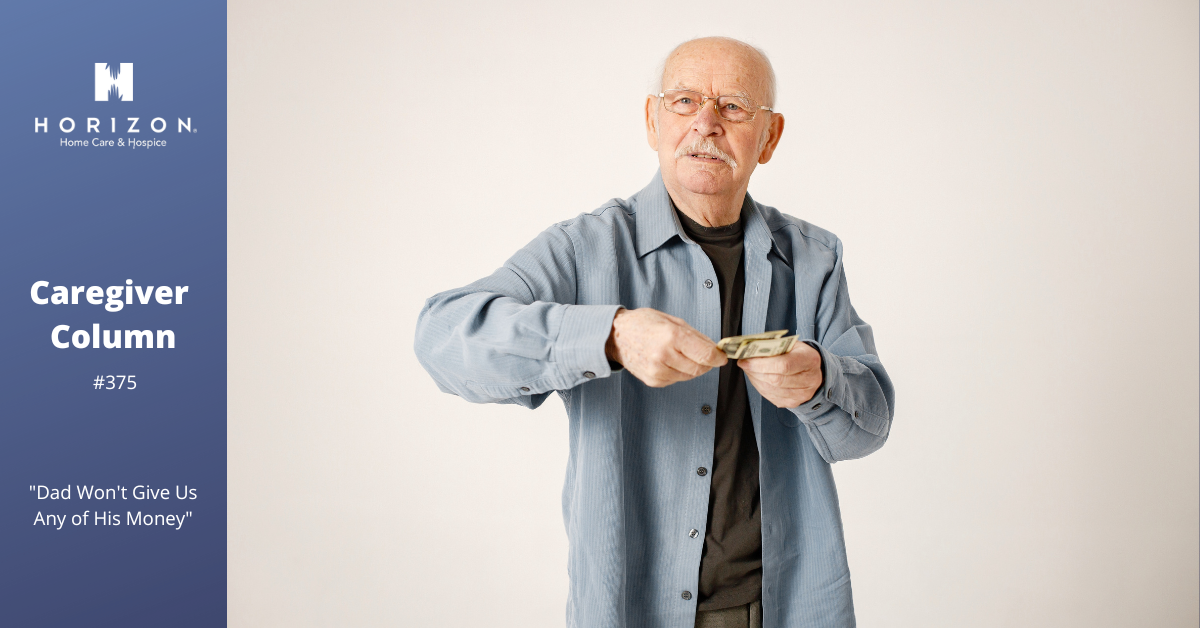 My father is so cheap. He has loads of money and doesn’t share it with us kids. He says “after I’m dead, and not before.”

Dad is in his 80s and has done well in life. He was professional and made good money. He saved and was conservative all his life. He rarely splurged on anything.

He did see to it that we were clothed and fed. He made sure we went to school every day and got jobs when we were 16. He also demanded that we go to college, yet we had to foot some of the bill ourselves.

At this point in his life, he has more money than he will ever spend. I don’t see why he’s not willing to share it with his children. He could put his grandchildren through college or buy a few vacations for the family. Instead, he holds on as though he will be able to take that money with him.

Should I press on the issue a little bit harder to get him to loosen the purse strings?

You have described a very responsible parent who took care of essentials and saw to it that you were educated. Lucky child!

You have described a smart parent who took care of his family when they needed it, and saved the rest. It sounds like he had good values and a strong commitment to protecting his needs in the future. It doesn’t get smarter than that.

He may seem stingy to you. Maybe he’s not spending as you would. But that’s his choice. Who knows? He could have very costly care needs in the future, and he’s protecting his assets for that time.

Do realize that you see an untapped pot of money. It surely would be nice to have his money for a vacation. That’s a want though, and not a need. It’s also much easier to spend someone else’s money rather than your own.

It seems as though you have already asked him about this, so now, just let him be. Pressuring him to pay for a vacation, new car, remodel project, or some other want is not something I suggest you do again.

I trust that since you’ve been educated that you are employed and able to support yourself. Save up for the luxuries you desire, just like your father did. Ask yourself why you feel your father’s money should be given to you. He could even donate it all and that would be his right.

Frankly, he might be more likely to give you some of his money if he sees you saving and investing, like he did. Speaking as a parent with adult children, I like to see that my children share my values and use money wisely. I also like to see that my children are planning for their self-funded retirements. So share with him your saving and investing strategies without any suggestion that he contribute to your plan or your wants. Gain his trust with your actions and hope that if there is money left when he passes, he leaves some of it to you.

Money is always a tough subject with family members. Tread lightly on this one. Remember that the money is his and you are not entitled to any of it. It may all work out.

How Do I Keep Mom Safe from Harm?

Who Takes Over the Caregiving When I'm Sick?