Currently, as a Chaplain at Horizon Home Care & Hospice, Eugene provides spiritual guidance and companionship to patients in hospice.

But previously, he was a law enforcement officer in Detroit. Before that, he was a radio operator in the United States Marine Corps.

The pieces of Eugene’s past seem vastly different--until you talk to him, that is. Then it becomes clear: each job has been a piece to the puzzle of service—serving the country, serving the city, and serving the ill. 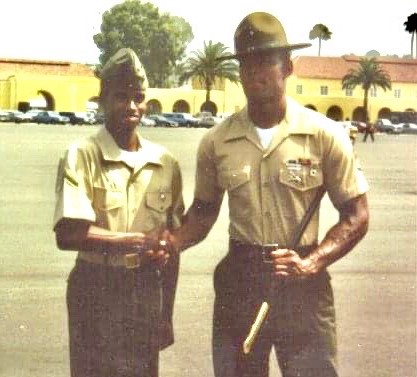 Eugene spent four years in the United States Marine Corps. While he was stationed in Okinawa, Japan , he did deploy to the Philippines, Hong Kong and Malaysia and also took part in Operation: Desert Storm at the tail end of his service.

But it didn’t take long for Eugene to acquire and refine skills in the military that he still uses today. “Immediately, boot camp gave me a greater awareness of my leadership abilities. You learn how to relate, engage and motivate others, which is invaluable no matter what situation you find yourself in.”

Those skills were important during Eugene’s time in law enforcement. It was a job he says “showed me the worst of humanity, and yet the grace of God.”

And they are extremely important in his current job as chaplain, as well. “It’s the intangibles from the military like respect and leadership that cross over and relate to the care I give to patients,” Eugene says.

When Eugene started visiting a patient at Alexian Village in Milwaukee some years ago, the two quickly formed a bond that surprised others. The patient was a veteran and notoriously tight-lipped about his experiences before Eugene, a fellow veteran, came along. With their shared experience as a foundation, they regularly had long talks over coffee, with the patient sometimes sharing stories with Eugene that he had never even shared with his own son.

Growing up, Alyse Tahat’s mother fell ill, requiring a nurse to make in-home visits to their family home. It was such a positive experience for Alyse that ever since then, she knew she wanted to be a nurse.

Before fulfilling that dream, though, she joined the United States Army, working in telecommunications. From 1992-1999, she spent time living at Fort Knox in Kentucky, in England and in South Korea.

“It was exciting, interacting with different people and learning about different cultures. Learning to adapt to new environments was really important.”

That skill remains important in Alyse’s work as an RN Case Manager with Horizon. She travels across the city between patient homes, making genuine connections with each patient no matter where they live or where they are in their life.

She finds that staying focused, like she learned in the service, is also vital to what she does. “I find that the more I listen, the more I can help patients and individualize their plan of care.”

For veterans, Horizon is home

When Alyse did pivot from the Army back to her childhood dream of working in healthcare, she found her preferred environment at Horizon. “You can shine and make an impact in a smaller setting.” She adds, “For me, wanting a higher pace and the ability to manage my time and skills—Horizon is a good fit.”

As a veteran himself, Eugene is proud to work for an agency that understands the challenges veterans face, especially at end-of-life. “It gives me a sense of comfort to know Horizon really honors service—both my experience and the experiences of others. Veterans get that extra level of care.”

How Do I Keep Mom Safe from Harm?

Who Takes Over the Caregiving When I'm Sick?